all last weekend and beginning of last week I was binge watching some things on Netflix that really got me thinking.... first it was all episodes of "Chef''s Table" telling the story of ten different chefs aroud the world who had one of the the top 50 restaurants and then I'm up to episode 10 of "The Mind of a Chef" season one following David Chang from Momofuku around the kitchen and various countries talking to chef friends and the search for something new from the very basic of ingredients. All that talk of creative thinking plays in my mind, not as an artist but I think for anyone thinking of ways to improve whatever your interests are.  For me I kept thinking about what different ways I might apply it to the way I teach.  A few different quotes made me think, one was a chef saying that creativity is not always done by people who just seek creating new things and always want to be creative, yet he made the point that sometimes creativity comes from necessity.  I think that really speaks to people who write themselves off as non artistic and therefore non creative. SOmetimes it's necessity that demands one be creative and gain whatever kind of success they seek.  Another quote I liked applying to my work was David Chang saying something about how when you are challenge, you are living. If there is no challenge and no seeking challenges, you are dying.  that was motivating somewhat for me.  I suppose it encourages me to apply for that job I'm underqualified for without a PHD. In fact, I heard an ad for a PHD program at UCO in Edmond via Swansea University in Wales which sounded interesting and I think I'm going to attend an informational meeting on it next week.  I can't imagine what sort of prospectus I'd have to write about the subject I'd research or study to add something new to the world. whew! (It'd have to be something I thought interesting or that would directly apply to my job, for example the effect of technology on how students write etc...),but I will pursue and move forward accordingly...
Ending the new year happened way up in the panhandle of Oklahoma.  I drove up there Wednesday and surprised me sister and hubby and 4 kids.... it's about a 4 hour drive up through Watonga and then Woodward and then up north and west west west on a highway that seems to go nowhere. ha long drive. I arrived while my sister was getting a hair cut with the nieces at home, and without seeing my truck outside, she walked in though the door from the garage to see me at the kitchen table. ha! I was eating my lunch I brought with me on the trip.  we hung out the rest of the day and then I took the whole family to see Star Wars! It's something they wouldn't normally do with 4 kids, much less get the 3D tickets, so I was thrilled to see it again with them.  Plus I think it's a good memory for kids to see it at the theater, and sure enough they all thought it was pretty great.
Thursday mornign I made scones for the family, and I helped my sister recover all her kitchen table chairs with new fabric she'd had for a while. after lunch we watched some tv and she drove me around the small city to show me the school they worked at and attended and other landmarks in town including the tiny little grocery store. watched the OU game all day and other games, had home made pizza for dinner and then games all night with the kids, banana grams and something called apple apple. I drove home yesterday after breakfast and helping sis take down the tree and packing up all my stuff.  I brought back home with me a rug I had made for my sister while in AFghanistan. She's never used it because it's this sort fo strange orange color, so I"m going to trade it out for one she likes, for example I have 3 or 4 multicolored ones that she might prefer to use. I'll include a photo of the rug I had made for her, it was supposed to be green with a sort of straw golden color from a photo of a rug I saw in a magazine and gave to a student to have made.  It turned out nice looking with chrysanthemums and all but a strange melon orange sort of shade. I'll use it my house come February. 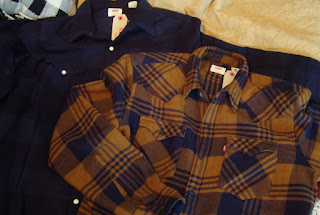 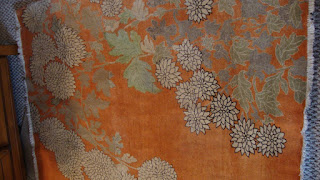 I drove home all afternoon. I stopped in Seiling Oklahoma and this fantastic new convenience has station there. it's HUGE and has everything, Express 66, car fueling on north side and trucks on the south. There is a SOnic on the East side of the building and a "cafe bistro" eating place on the west, there's also everything you'd want sort of like a small grocery store inside including a barber shop. the men's room had a flatscreen tv playing sports above every urinal. Oh, and the whole place had FREE WIFI! ha... I got a chicken parm sandwich with their homemade potato chips and it was YUM.
Before coming home I stopped off at the outlet mall.  Ever since I got this orange and navy flannel shirt in NYC at the Levi's store, I wanted to check the Levi's at the outlet mall. I stopped in after arriving back to OKC around 4pm. shoped Levis and got some pants for $10 to wear in the yard next summer and another blue black plaid flannel that fits just like the other one although it's a lesser outlet quality.  I also went the bookstore there where a former student of mine works. bought a few marked down graphic novels, one about how the author grew up loving the band Queen, and another all about the life of the author's great grandfather Long Tack Sam, (which apparently was also a doc film I'll have to search out after reading about him). 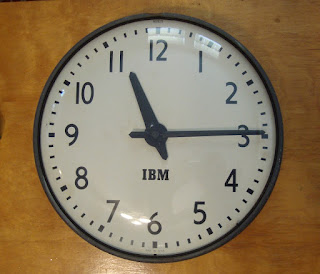 relaxed last night and this morning getting a little bit done like unpacking and place cleaned up.  I have a college friend coming to stay over Tuesday night and Friday night next week on his way from Kansas to Austin and back. He's a speaker at some function there I guess. We're both English profs so I look forward to catching up.  He's the same guy I saw in Manhattan Kansas last summer if anyone remembers such.  I'll do my usual pizza lunch today and I think tonight my buddy S has some plans of getting a meal either ordered in or going out and then playing cards. His bf's best friend Jn is in town with his bf Jo. and another couple D and G might be coming or not.
I must try to do less trivial spending this year, really hope to spend more wisely. one thing I want to do is get this old school clock telling time again. It's something I took from the last high school job I had, they were cleaning up the shop classroom which had tons of junk all over the place stored by a teacher who worked there for years and years and then died that year. the new guy was all about getting it cleaned OUT!  I'm also considering getting another print by Michael Menchaca to go with the one I bought last year and had framed for my office. it's sort of out there but unique enough it fits my taste. :P not sure which one is the better compliment.. 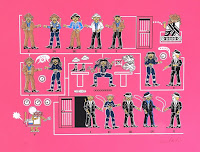 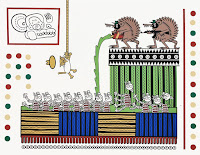 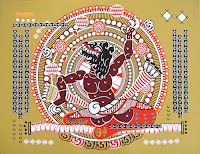 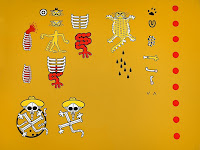 Happy New Year all! I don't really make new year goals but I like to have a focus. This year it is "respect"  the last two years my focus was about generosity and the coupe years before that was wisdom.  anyway I also like to just reassess things, especially on long drives, so I'm happy where I am, moving forward with getting money saved to do home improvement and upkeep, also pursue career goals, improve my methods of teaching, attempt to get to Iceland this year maybe?, definitely back to NYC in Feb, also we're over the hump of winter which means I can start counting down to spring?? :) cheers for checking out the blog.