I had a great time in NYC! man last week flew by.Flying direct flights is definitley the way to go from now on, ha. it was great to leave OKC and land in NYC just before noon. I got a round trip Newark bus express ticket for $28 and hopped on the bus and got off at port authority terminal 42nd street. then subway down to 14th and 8th ave. I always get a 7 day pass subway ticket for $30 which is the way to go! anyway. I don't know if I ever mentioned the hotel dilemma I almost ran into. on Monday last week, I was checking through all my saved emails for my reservations, and couldn't find the email for my stay! I had previously held rooms for 3 for the weekend, but that got cancelled and I waa CERTAIN I made one for a single room earlier in the week. well I called the hotel to confirm and they didn't have me for anything. ugh. and all rooms were booked online when I entered my days.... well I was freaking out. Well at first I was checking rooms on a reservation page, and nothing for any of my 3 days! then I noticed it wasn't the actual hotel webpage, so I went there, and still nothing for my 3 days... well then I started checking to see if any ONE of the nights was free. so I entered each date in one by one and found a single room available. not sure why it wouldn't show them 3 in a row, but anyway, so I reserved each one seperately and had a confirmantion number for each night. whew! I was glad. Although the Jane hotel is a walk from the subway station, it's still very affordable at $115 a night and plus it's always comfortable, clean, friendly and in a fun part of town.
Tuesday morning I was checked into my room and out the door by 130pm, ready to hit the town. :)  I walked around and got my bearings again on the streets. West village can be confusing because there are a lot of zigzag and triangle intersections.  The weather was awesome. I walked around that part of town and then got back on the subway up to 34th street, and then walked up to Time Square. hitting random stores including my usual stop at quiksilvr and Elemental and Swatch. I bought a new watch actually and had a battery replaced in an old one.
Next walked on over to Grand Central station and  then found the Joe Fresh store on 5th avenue.  I was underwhelmed this time.  What sucked the most was the help, it was HORRIBLE service, and remember I'm an always positive thinking forgiving person, right?  Man they were awful, it was likely they were agressively not trying to help anyone. ha  the worst, That might be part of their sales approach I guess, but when you feel like you are bothering someone just to ask a question, then it's pretty bad, or when people are moving around you like you are in the way and seem like they're trying to avoid getting bothered by anyone, that's a problem. anyway just my 2 cents on Joe Fresh, which I really wanted to like.  I did find some SUPER awesome swimwear, and bought 3 of them. ha......
then over to Bryant Park.  as it got close to 5, I headed back towards a subway to get back to my hotel. got there about 530 and relaxed and changed and cleaned up for the show at 7. rushed back uptown and while walking down to the theater , I stopped and got a pizza by the slice for dinner. man that was YUMMY, chicken parmesan sliced up on a pizza. mm I stood outside eating my slice while everyone crowded around lining up to get in the show. 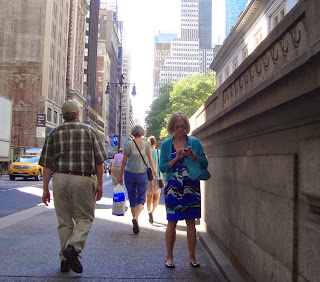 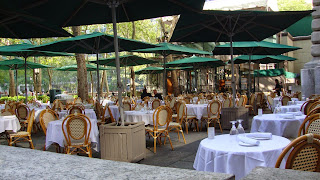 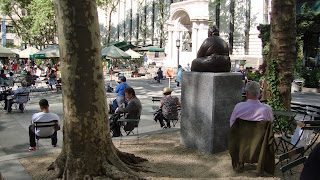 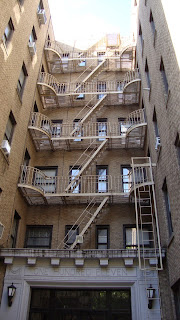 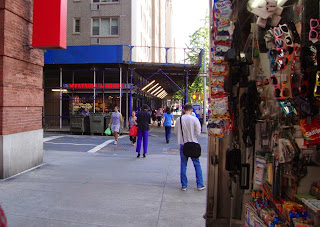 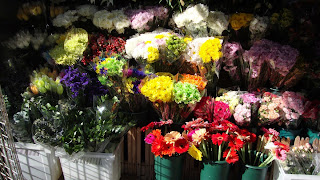 A Gentleman's Guide to Love and Murder!!! wow, I'm telling you it was nonstop!!! the story is about the poor guy who finds out he's an heir to being a Duke , and so he plans a way to get rid of the 8 other family members in line before him.  It is great!! It's got this traditional staged performance style to it, so much going on that little stage. I particularly liked the way they built a stage on the stage, it give an old timey feel to the performance and also creates this interesting frame to the show. So MUCH going on, did I mention, quick change is RIGHT! there is this one actor who plays all the family members and how amazing to play so many different comedic characters! wow!! the man trying become an heir is also amazing, and I thought of describing him as looking like a sort of mix between Christopher Walken and Jude Law. the acting dancing singing is nonstop.. and the songs were as cleverly written as described in reviews. I can definitely see why it got all the nominations. Really enjoyed it!!the gags kept coming right up to the very end. ha
well I left the show and walked back to busy crowded Time Square, so many people, I ended up in an H&M store and found myself spending $122 dollars on some great stuff, 2 shirts, a jeans, 2 pants. back to the hotel and CRASHED. :)