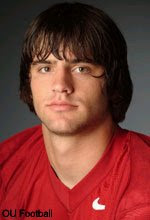 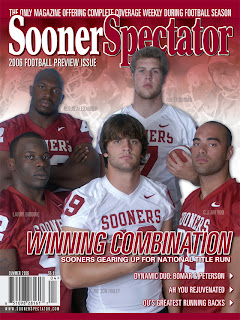 some pics of 6'6, 260 lb Joe Jon Finley. Could you have a more all American football player name than that. A friend of a friend who works at OU was saying how this guy has girls waiting in line and the word is a differet practically every night. Stud! I mean that may seem cool or just sleazy but either way. I imagine there are Hot times being had. Just look at this guy, eyes, hair, mouth, cheekbones, arms, legs, etc etc etc.
anyway the group pic is from a year ago, and then the other one from this year. What's sad is the guy R. Bomar in the back right of the pic. He was getting paid for working at a car dealership where he wasn't even working and then he and another teammate got caught. So his quarterbacking days at OU were OVER, and caused the football program all sorts of grief last year.
For those of you NOT in the sooner nation, have you heard of the OU true freshman football player, most likely playing the season opener, who was arrested a few days before last weekend's game for stealing gas. This guy, wide receiver Ryan Brown, was caught with keys to a gas station filling up in the wee hours of the morning. What's worse is that Norman is his hometown where he had just graduated and all stated from the highschool last year. Poor Poor choices this young man made, it's unbelievable the opportunity he through away. anyway you can reaad more about THAT HERE.