been considering to mention it or not, but I've been getting to know a girl at work really really well these last few weeks and we have tons and tons in common, interests and life goals etc.. sigh. so already, I've discussed it with some friends last weekend, a str8 married couple, and the concensus is the same as most comments on this blog, that is, don't lead her on. I've decided that if we go out on a date it will be strictly as friends and I'll just take it from there. basically, since my ex girlfriend broke up with me, I've made no effort to be friends with any girls unless I was seriously interested in dating them and sleeping with them etc etc. So now years later I'm having to redecide if I'm comfortable being just friends and hanging out with a girl, or whether I want to date anyone else, because I honestly really do miss my ex-gf and we had the best of fun times together..blah blah blah.

anyway, regardless of all that. I haven't posted much this week and signing up on facebook last night didn't help! I had the best of time finding a lot of former students in Central AMerica on there, and they are all grown up and looking great and wonderful and sending me a lot of awesome "wall" messages.. ha also all my college buds are on there, and there is a really interesting dynamic in sharing pics.
I plan to to scan some pics of when my students were in 8th grade and put up and album for them to check out and think about the good ole days with Mr. cracking jokes and pouring out the love for 'em.

whos' ready for the weekend? I am. seeing the parents tomorrow to get some SWEET furniture from other family. I guess gay pride is this weekend in OKC so it may be one of those rare weekend I go out and see if there are any laid back normal masculine hot guys out, new faces and all that. i doubt there would be, maybe I'l stay in. ha
of course, I'm a closet dude, and will having nothing to do with any gay pride in okc. no offense to those living and free and proud and all that etc etc.
5 comments:

get me to the beach! 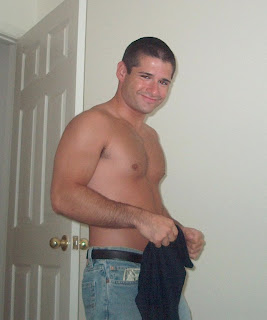 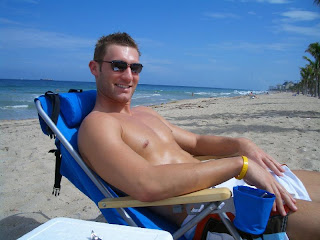 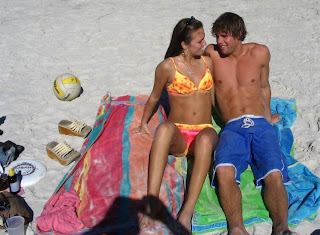 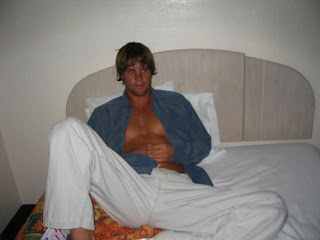 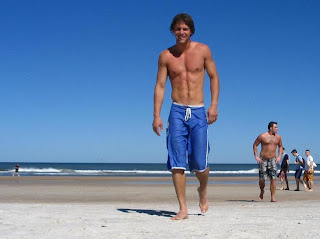 we just finished watching Pan's labyrinth together.
Sunday night we watched "Dodgeball" together too. so it's been pretty nice having someone around to watch a show with. I was impressed he was willing to sit through a foreign film that you have to read.
it's storming and raining and thundering tons here tonight, perfect for going to sleep to.
I ran into my bud, the law school student from Utah, at the gym today. He's made gay friends in the city by now and is going out two night every weekend and had asked me if I was going out this weekend. hell no I told him, why bother? and he agreed that he noticed how boring the bars and scene were here in Okc. ahh well, I know there is a different better social gay scene in OKC, it's just not at the bars, if I were OUT I'd have this city swinging into gear, serious.... or not. I don't know, pretty much it won't ever be like it was in college. speaking of college, I have a test tomorrow for a class I"m taking this summer at the Junior college, not sure if I'd mentioned it, guess I better study some more and then hit the sheets.

btw, anyone suggest some good vacations for me and my gay AUstin bud (we are friends only). he called tonight and set we need to take a trip somewhere fun and interesting and most likely in the US.
ALSO someboday leave me a motivating comment to get back to the gym I've been off for 1 and a half weeks now just running and stretching and doing situps and pullups at the gym. I'd like to get back to my routine of working out but just not feeling it lately. I'll have to plan a trip so I have some motivation to hit it again.....ha
8 comments:

just HAD to repost the happy winner....

Thanks tons for the comments, all comments seriously.(alpha omega, let me know how to find your blog....and thanks) you other guys with blogs will understand its nice just to be "heard" whether people agree completley or not. etc...
sorry no posts in a few days I've been gone to Arkansas all weekend having a good ole time with my married bud up there. Friday night relaxed back at home. Saturday morning I met my ex-gf from college and went up to the college for her early enrollment (she's moving back there and going back to school, long story) My buddy's wife was busy with work all day Saturday so we went running around Fayetteville and Rogers all day. errands, checking out property, and shopping around. came back that ngiht and he and his wife fixed some very awesome chicken parmesan. drove back this morning after church and bought some shorts at the Fossil store in Tulsa and went to the Gilcrease museum to check out the Andrew Wyeth exhibit there....

anyway, now, about the roomate... he was SO busted last week, I came home Thursday night after work and found a little hotel room bottle of lotion left lying behind the keyboard.. HA HA.
I didn't recognize it as mine and just left it there... then when I got back tonight it's gone, I hope he felt a little funny leaving his jerking lotion in here. the bottle had a little lotion outside the cap, sort of like when you're busy and trying to put the lid back on... ha ha.
well I guarantee I'd be a lot quicker to cover my tracks than this guy. it's pretty funny. the nice thing is he's not checking a bunch of porn or anything just myspace pics of hoochie-mama profiles with tits on there.

we watched the movie dodgeball together tonight and i warned him a college friend is coming to stay Thursday night in my room, a girl coming to okc, I'll sleep on the couch she's just a friend.
anyone else have a good weekend? I should be posting more this week, just had no time at all last week to search up some good pics. ...
2 comments: